House building materials – more choice than might be thought?

It has to be said that the human race has moved on considerably from the time we sheltered in caves and evolved into living in the bricks and mortar structures of today. The use of house building material has often been shaped by the tools available, so as Stone Age man moved around the territory he was able to use his stone tools to create a tent made of animal skins for shelter.

House building techniques moved on to using mud and clay to form the walls. This evolved into the wattle and daub system whereby a wooden framework is effectively plastered with a mixture of clay, mud and straw. It is a testament to the effectiveness of this building method that examples of structures made in this way can still be seen today.

As tools developed more robust buildings were created using stone which was formed into blocks and held together by cement or mortar. Forming stone into usable sizes for building took time and was labour intensive and the brick, which is believed to have first been used 9,000 years ago, came to be used. Originally made of mud, the brick was later sun dried to improve the hardening process, which was later further refined by drying in a kiln to ensure consistency.

The Industrial Revolution created the need for more factories and dwellings and developing technology meant that bricks could be mass produced to meet the requirement. The brick then has won out as the main choice for house building, but there are other more creative materials being used around the world. 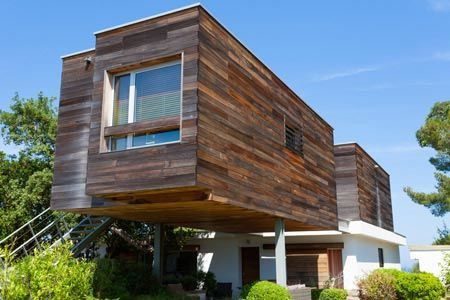 It is not unknown for houses to be built from a variety of materials including tyres, bamboo and all manner of recycled materials. In South America an innovative home owner, faced with a lack of funds, has built a house using plastic bottles, and there are dwellings in East London made out of shipping containers. In fact the Grand Designs tv programme recently featured a house made from two shipping containers, see this article. As a company interested in building and design (particularly the doors), Grand Designs is a programme close to our heart and I hope that you were able to go to the recent Grand Designs where we exhibited.

Something else that is being extensively used in modern designer houses is glass as a structural material. The separation between the inside and the outside becomes less distinct and more glazing brings the exterior view into the house making it feel more part of the landscape, as well as adding more natural light. This option along with most of the other more unusual building materials tend to be used in individual builds often on more isolated plots.

The likelihood that bricks will be replaced by other materials is unlikely for mainstream housing, but different designs and materials allows the more adventurous to give their imagination full rein and gives them an unusual place to live in, and gives the rest of us something to talk about!