Home » Inspiration Hub » Top Tips & Trends » Door Gods: What, why and where

Door Gods: What, why and where

At JB Kind we pride ourselves on having a comprehensive knowledge of everything doors. This might be practical information on, for example, fire doors, style guidance on door trends, fun facts on the world’s most famous doors or, in this case, the important historic Chinese custom of Door Gods.

For those of you that haven’t yet heard of Door Gods, let us explain some more about this fascinating custom.  The practice combines Chinese tradition and style with the need to provide a safe and secure home, as well as desire for individuality and design flair. 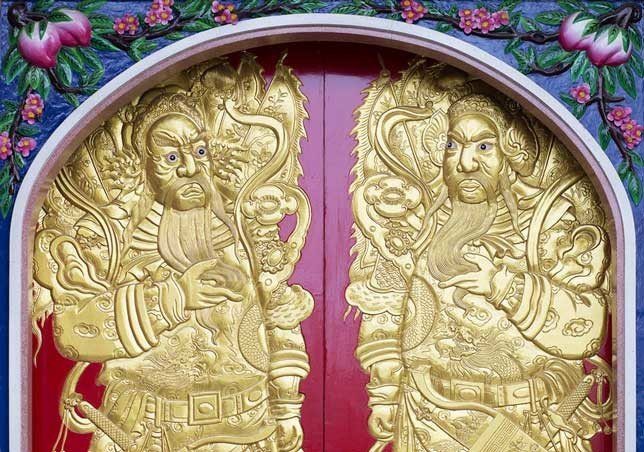 What are Door Gods?

Known in Chinese as 門神 or mén shén, Door Gods are worshipped by the Chinese as spiritual guardians of the entrance. The earliest Door Gods were Shen Shu and Yu Lei who guarded the entrance to heaven under a magical peach tree that grew on Mount Tu Shuo. However, since becoming a popular custom during the time of the Tang Dynasty, Door Gods are now thought to protect homes and rooms from evil spirits, preventing them from entering, and bring peace and good fortune to the residents of the home.

Usually in pairs and facing each other, it is considered very bad luck to place the figures back to back. Door Gods are painted onto doors and can take on many forms – there are now many different types of Door Gods too.

How did Door Gods become important? 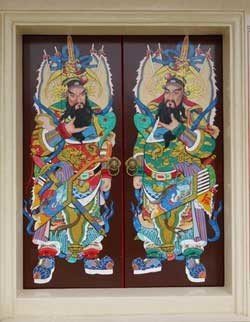 The custom became popular during the Tang Dynasty (618- 907 AD), the story is told that the then Emperor, Taizhong, had a dream in which ghosts came to the palace to find him and hurt him. When he woke, he believed his dream may be a prophecy and come true and so became worried.

The Emperor explained his concerns to his most trusted aides in the Imperial Court and two of his Generals, Qin Qigong and Yuchi Gong, both of whom had fought with him to establish the Tang dynasty, decided to watch over their friend the Emperor by standing either side of his bedroom door throughout the night. Emperor Taizhong, knowing he was protected, slept soundly and never dreamt of the prophecy again. The following day, the Emperor, didn’t want to see his two Generals without sleep for a further night, arranged for paintings of both to be hung outside his room, on either side of his door, just as they would stand if they were there, so he could trick the evil spirits. The Emperor slept soundly again and the paintings stayed in place for the rest of his life, keeping him safe and enabling him to sleep.

Soon the story was told throughout China and its people came to believe that they could also be protected if they painted images of the famous Generals on their doors – the pictures guiding the Generals’ spirits to their homes to ward off and fight any evil that tried to enter their homes. The tradition of brave spirits protecting homes has continued and developed over time and now there are more variations on the original story, and the Door Gods available to protect you.

What are the different types of Door God? 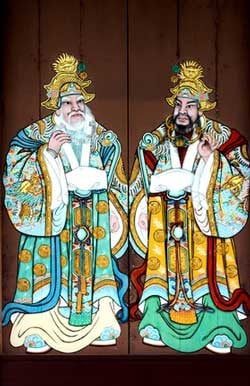 Martial Door Gods have been a variety of paired individuals throughout history, from the initial two Generals to other renowned soldiers known for their weaponry skills, strength, loyalty and trustworthiness. Commonly painted to illustrate their soldier status, in armour and with weapons, the Martial Door Gods protect homes with their strength and physical skills and are most commonly found on external doors.

Literary Door Gods are also known as inner door gods or civil door gods as they are usually based on academics from the Court and use their knowledge and mind to defeat the evil spirits. These scholarly pairs are most commonly found on internal doors, like rooms doors and doors to courtyards, and are also thought to bring a feeling of peace and comfort to the residents of the home, in addition to their protective properties.

When do you worship Door Gods?

It is particularly important to recognise Door Gods during the Chinese Spring Festival – often known as Chinese New Year. In 2018, Chinese New Year is on February 18, and will be the Year of the Dog according to the Chinese Zodiac. To celebrate the New Year, Door God paintings are often refurbished with bright colours, often red, to ward off the Nian, who was said liked to eat children, but was afraid of bright colours, especially red.

Door Gods are still very much a part of Chinese custom, with Door Gods adorning many doors across the country. They are still the subject of many books and films – like the family animation, Little Door Gods, in 2016 and the more serious film, Door God, written and directed by Liulin Liu.

The Western world has also begun to adopt the custom of Door Gods, with many people being drawn to the idea of protection for their loved ones, alongside the decorative and detailed nature of the imagery used within this Chinese custom. Often Door Gods are now statues or figurines on the either side of a door, as opposed to paintings on a door, with some dedications on external doors taking place in the form of door knockers, in the shape of one or more Door Gods. Whether you are inspired to change the look of your doors or whether you are just interested in this fascinating phenomenon, take some time to consider if Door Gods would ever benefit your home.