Once your front door is safely closed, your home is a place of solace and comfort. For most of us, there is no better feeling than getting in from a long day at work, indulging in a hot bath and having some chill time in front of the television. However, with Halloween just around the corner, we thought it best to give you something to think about. When you hear creaks and bumps in the night, do your best to sleep tight. Let us show you the horror houses you won’t want to enter… 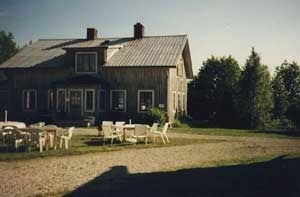 Nestled in the small village of Borgvattnet in Northern Sweden is The Old Vicarage. This unassuming but very quaint wooden building was built in 1876 and, over the years, has been the home of several vicars.

The first instance of paranormal activity was reported in 1927, some ninety years later. Chaplain at the time, Nils Hedlund, witnessed his laundry being torn from the line. As the years passed and further guests lived in The Old Vicarage, reports of spirits in bedrooms and objects moving on their own came in thick and fast.

Today, the property is a bed and breakfast. On your departure, guests receive a certificate of their bravery as paranormal activity within the home has reached startling levels. 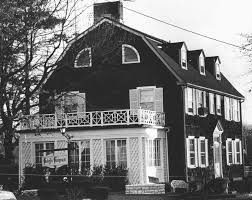 Thrust into the limelight by Jay Anson’s book The Amityville Horror in 1977, and the countless films since, is the sprawling house at 112 Ocean Avenue. Located in Amityville, on New York’s Long Island, the colonial-style family home was purchased by the Lutz family in 1975.

Little more than a year earlier, Ronnie DeFeo methodically went from room to room, shooting his parents and four siblings as they lay asleep in their beds. DeFeo claimed voices had told him to do it.

Having bought the property for a bargain price, the Lutz family aired on the side of caution and had a priest bless the house on the day they moved in. The priest became ill on the spot and his hands began to bleed. Somewhat bizarrely, the Lutz family moved in anyway. However, they only lasted 28 days. The family fled the house, leaving their belongings behind; convinced the house was possessed by an evil force due to the terror they faced during their time at 112 Ocean Avenue. 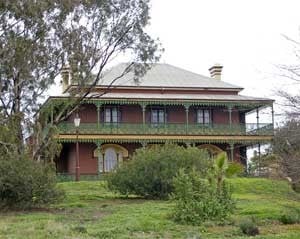 An undeniable architectural jewel in Australia’s crown, the Monte Cristo Homestead might look like a welcoming place to spend the night. However, behind the glass panelled front door lies countless terrors.

Built in 1885, the property has become part of Australia’s history and is said to have been cursed by a witch. Considering the tragedies related to the homestead, many who visit believe the tales to be gospel.

The Crawley family were the first to call Monte Cristo home. During their residence, countless unexplained deaths and oddities filled their lives. A mentally ill man was found chained up next to the body of his mother in a shack on the land, young children were flung down stairs, a maid fell from a balcony and a stable boy went up in flames.

Mrs Ryan has owned the property since 1961, after a gardener was killed by a child with a gun just two years prior. Mrs Ryan allows paranormal groups to explore her home. However, many are spooked by the ghost of Mrs Crawley or are overcome with feelings of dread and misery. 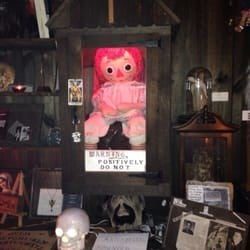 If you are aware of Annabelle, Amityville, or the Enfield Poltergeist, the names Ed and Lorraine Warren will likely be recognised. The couple founded the New England Society for Psychic Research and helped families worldwide in regards to paranormal activity. Ed, who sadly passed away in 2006, was a police officer turned demonologist. He is survived by his wife, Lorraine, who is said to be clairvoyant and a light trance medium.

Whether their controversial career is truth or not, their home at 94 Knollwood Street in Connecticut is enough to have anyone fleeing. On the surface, their pale yellow timber home is welcoming and surrounded by greenery. However, it is the museum in their basement which causes nightmares.

Dark and dingy, the Warren’s museum is full of the obscure. The real life Anabelle doll is secure in a locked glass box and there are Ouija boards, voodoo dolls and possessed items strewn throughout. Undeniably spooky, many visitors who enter as sceptics leave the Warren’s museum utterly uncomfortable. 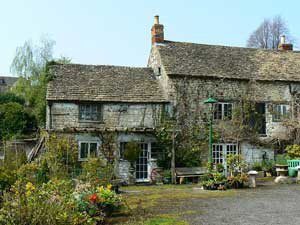 Anyone visiting the Cotswolds would take one look at the beautiful medieval Ancient Ram Inn and mark it as a part of Gloucestershire’s history. Whilst the Grade II listed building is undeniably quaint, it has a menacing reputation and is believed to be the most haunted house in the UK. So notorious is the inn, that locals refuse to walk past it or even set their sights on it.

The property was built in 1145 and was used to house masons and slaves working on the nearby St Mary’s Church. In 1965, after losing appeal from locals who were frightened by its aura, the Ancient Ram Inn faced dereliction. It was, however, saved by John Humphries. Now a pensioner, John’s carers have fled the inn on many occasions after being attacked by spirits or being deafened by bloodcurdling screams.

Countless ghosts are said to haunt the property, including a woman murdered by highwaymen and a dead cavalier. The evilest, however, are the resident incubus and succubus. Once a non-believer, John’s daughter has witnessed so much paranormal activity that she has completely changed her mind.

Reverend John Yates once tried to exorcise The Ancient Ram Inn. After failing to do so he stated the media that it is the ‘most evil place I have ever had the misfortune to visit’.