The World’s Most Famous Doors: Our Top Ten

The magic and mystery of doors and doorways has lasted for thousands of years. A portal to secret things, or perhaps the afterlife, the earliest records we have of the use of doors are painted versions on Egyptian tombs. Many people are fascinated by doors, from their often intriguing architecture to the sheer decorative exuberance found in many examples around the world. From the highly ornate doorways on an Italian cathedral to the elaborate carvings on an African wooden door, there are some truly spectacular examples to be found wherever you are.

And yet it is not just aesthetically that a door is a remarkable thing. Often the world’s most iconic doors are famed as much as for what they represent as for how they look.

So here is our by no means exhaustive list of the world’s ten best known doors. Note that we have specifically chosen actual doors, rather than gates or gateways, which are not at all the same thing. Also, we haven’t included any from London, since they’re in a separate blog all to themselves. Some in this line-up are beautiful, some symbolic, some historic, some all three. 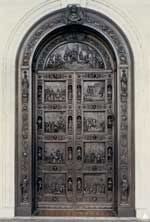 These nineteenth century bronze doors measure nearly 17 feet tall by nine feet wide and depict scenes from the life of explorer Christopher Columbus in a series of highly ornate carvings.

Leading to the Rotunda, they were designed by American sculptor Randolph Rogers. 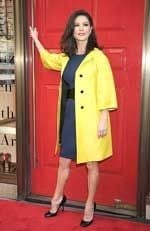 Founded by Elizabeth Arden in 1910, this American cosmetic brand is famous the world over for its red door spas and iconic scent of the same name. 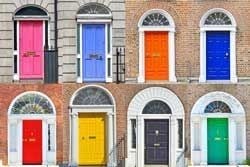 Browse the Internet on the subject of doors, and you will almost certainly find many tourist pictures of Dublin’s famous Georgian doors, brightly painted in all colours of the rainbow.

Often photographed side by side, they are the epitome of 18th century elegance. 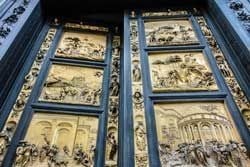 The bronze doors at the East entrance to the thousand year old hexagonal Baptistery are its most famous, featuring 28 panels depicting Christ’s life.

The original panels were taken down in 1990 to preserve them after 500 years of use, and substitutions are currently in their place. 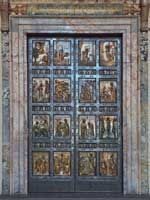 In the Roman Catholic faith, the holy door is normally bricked up and only opened on special years known as “Jubilees”. The faithful then pass through the door in a rite going back centuries.

The great bronze panels at St Peter’s are in fact relatively modern, having replaced the previous wooden ones in 1949. 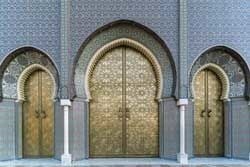 Brass doors to the Royal Palace in Fez, Morocco

The Royal Palace and gardens in Fez are not open to the public, but the three magnificent gates at their front are a much visited tourist attraction in their own right. 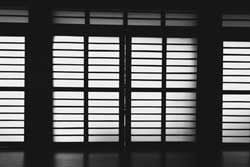 The traditional Japanese sliding door features in many films and are a design classic that has permeated the west because of their unique style and space saving qualities.

Dating back to fourth century China, the doors are made with a light wooden or bamboo lattice structure overlaid with paper. They are the essential requirement for entry into a Japanese tea ceremony. 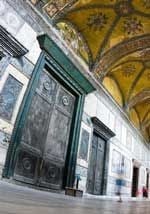 The Imperial door in the 1500-year-old Hagia Sophia is a truly magnificent giant doorway through which only emperors could pass until the spectacular Byzantine building’s current incarnation as a museum.

Famously overhung by a thousand year old mosaic of Christ, the sheer size and majesty of this door into the Hagia Sophia’s vast interior is breathtaking to behold. 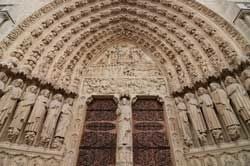 With around 13 million visitors a year in one of the most popular tourist cities in the world, many, many eyes have looked on the wonderful doorway to Paris’s illustrious cathedral over its 800 year history.

The doors to All Saints Church (or Castle Church), Wittenberg 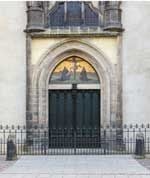 This last entry in our list is one which is valued for its history more than its beauty, being the door to which Martin Luther famously nailed his 95 theses in 1517, bringing about the German reformation and the advent of Protestantism.

The original wooden doors were destroyed by fire in 1760. Wittenberg castle church