As we have said in previous blog posts, the humble door is often overlooked as a merely practical piece of furniture to separate room from room, outside from in. But when it comes to drama, doors go from humdrum to highly symbolic. Memorable movie moments are often centred around doorways.

Think of Dorothy’s journey from gloomy sepia to glorious Technicolor as she goes through her Kansas cottage door into Oz, or the famous moment in Harry Potter and the Philosopher’s Stone when Professor McGonagall opens those huge doors, giving the expectant young witches and wizards their first glimpse of the enchanted Hogwarts dining room and the Sorting Hat.

So, here is our list of the most famous doors in film. You might have a different list, in which case, feel free to get in touch with your suggestions.

The Lord of the Rings – round hobbit door

Our first sight of that perfectly round doorway in a hill, is one of the iconic images of The Lord of the Rings and Hobbit film trilogies, in which director Peter Jackson so perfectly realised Tolkein’s contented vision of hobbits and the Shire. 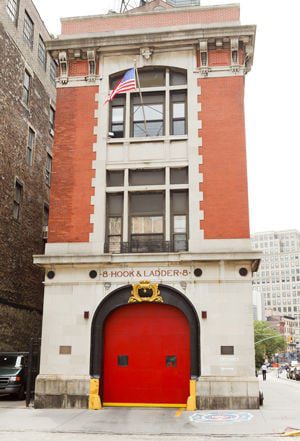 The original Ghostbusters movie features those famous red fire doors, and the whole building is in fact a real life fully operational fire station located in Manhattan, New York.  A popular stop off point for tourists and film buffs, visiting the city.

The film was remade this year with an all-female lead cast and, in an interesting twist, the actual building used in the original film makes an appearance.  So, if you get a chance to see the new film, look out for the cameo role and of course the fire doors! 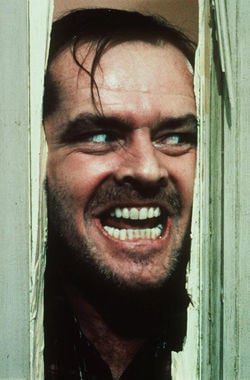 One of the most famous scenes in horror cinema has to be when the deranged Jack Torrance takes an axe to the bathroom door in which his wife Wendy is cowering, unable to get out.

Here, of course, the door is acting as a barrier between safety and danger.  The look on Jack Nicholson’s face is enough to give anyone nightmares!

Based on Stephen King’s novel, Stanley Kubrick’s film interpretation is now firmly in the movie hall of fame.

For a quick run through of the plot, read NY Daily News article from way back in 1980. 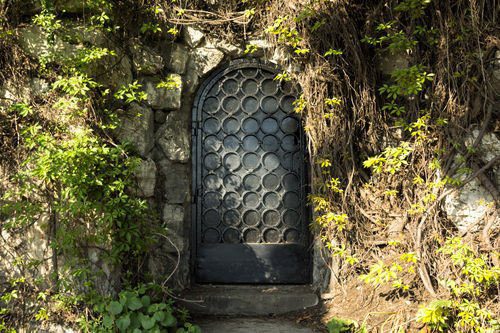 A door leading to another world has long featured in films and literature, and this is a classic example.

When stuck-up Mary Lennox finds an unobtrusive door in the grounds of the Yorkshire mansion she is staying in, she discovers a glorious hidden garden on the other side. By opening the door, so too does her personality gradually begin to soften. 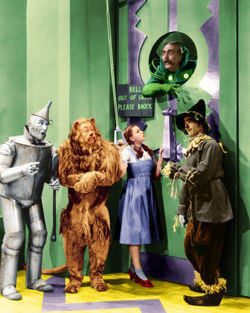 The Wizard of Oz – the door to the Emerald City

The move from sepia to technicolour mentioned above is one famous door in The Wizard of Oz.  Another is the huge, vibrantly verdant door to the Emerald City, with its peculiar circular window out of which a guard appears when Dorothy and her friends try to enter.

For some light hearted entertainment, browse through these wonderfully weird, as well as a few surprising Wizard of Oz facts 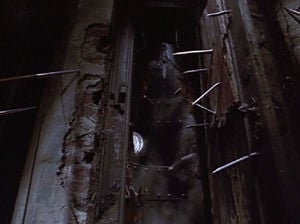 Of course doors are not only gateways to other worlds, they are also there to imprison.

The door is put to scary use in Matilda – the film of the Roald Dahl classic – when the terrible Miss Trunchbull throws Matilda in the “Chokey”, a door with spikes on the inside used for punishing children.

The Lion, the Witch and the Wardrobe – portal to Narnia 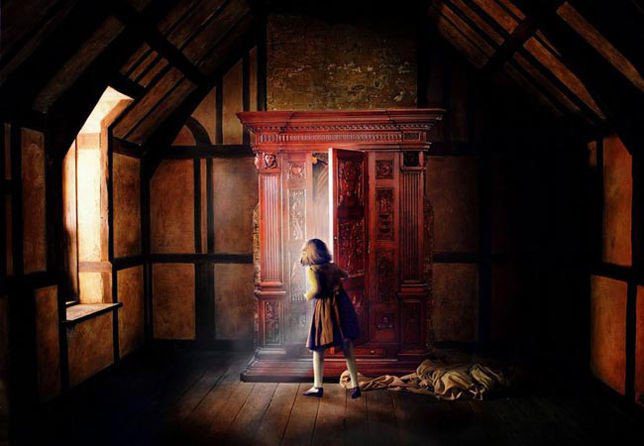 Perhaps the most famous film door of all. When little Lucy Pevensie is looking for a place to hide, she opens an innocent looking wardrobe door to find the gorgeous snowy landscape of Narnia behind the fur coats at the back.

The door in the film has carvings from the Narnia story on the front, including two lion heads at the top depicting the magical Aslan. 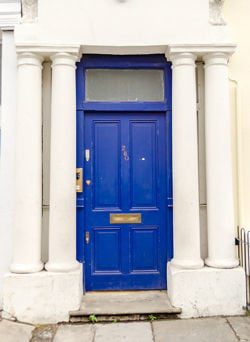 We have already referred to this famous film door in our London blog,  but this entry would be incomplete without mentioning it again.

The tatty-looking blue door in 1999’s Notting Hill took on its own  celebrity status after the film came out with crowds of tourists having their picture taken in front of it, leading to it being eventually auctioned off. In the story the door leads to the home of William Thacker, played by Hugh Grant, and could be found at 280 Westbourne Park Road. 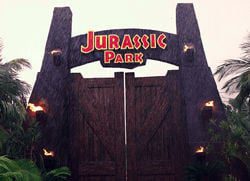 The wooden doors provided the gateway to see the … gulp … real dinosaurs in the original 1993 Jurassic Park.

As they swing open, let the havoc begin …

There’s not much left of the original gates now!
What do the gates of Jurassic Park look like now

Harry Potter and the Chamber of Secrets – snake door 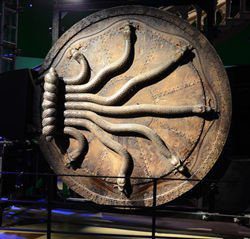 As well as the grand dining room doors mentioned above, one of the  most splendid doors in the Harry Potter film franchise has to be the round one leading to the underground chamber under Hogwarts, only to be opened by one who can speak Parseltongue, the language of snakes.

The elaborately carved serpents on the outside should provide all too clear a clue as to the monster that lies within … You can see the actual snake door used in the film at the Warner Brothers studios where the films were made. 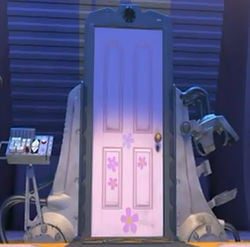 Rarely have the dramatic possibilities of doors been used to more imaginative effect than in Pixar’s Monster’s Inc, which brilliantly plays on every child’s fear that a monster lurks inside their wardrobe or outside their bedroom door.

The film’s climactic scene where Mike and Sulley desperately try to find the little girl Boo’s door out of a cavernous warehouse full of thousands of rapidly moving doors on roller-coasters – a true animation classic.

The 1998 classic Sliding Doors helped launch its lead actress Gwyneth Paltrow to mega-stardom with its quirky plot exploring how the course of our lives hinge on the way we act when presented with challenges: in this case, whether Gwyneth’s character Helen chooses to push her way through the closing doors of a London tube train or whether she will meekly wait for the next one.