Oak – a symbol of love and commitment

Who knew there was an Oak Wedding Anniversary? 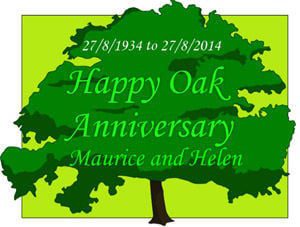 There was a lovely heart-warming story in the news a few weeks ago. On 27th August 1934 a young couple married – Maurice and Helen Kaye from Bournemouth. George V and Queen Mary were on the throne and Ramsay Macdonald was Prime Minister. The Great War had been over for just 16 years. Maurice is now 102 and Helen is 101 years old, and they have just celebrated their Oak wedding Anniversary. For those of you not familiar with this rare event, they have been married for 80 years! An extraordinary feat which is hard to believe when you see them. See more information

They met in 1929 when he was 17 and she was just 16 years old. They only had 6 years to enjoy before the outbreak of the Second World War, so the start of their life together must have been overshadowed by a growing sense of anxiety and alarm. Not to mention the death of the King and the constitutional crisis that resulted from Edward V111’s abdication at the end of 1936.

Nevertheless, they weathered the storm, going on to have 4 children. They were interviewed together by the BBC and despite their ages, were full of humour and great affection for each other. When asked what attracted Helen to Maurice she replied jokingly “He had a car and in those days not very many people had cars, which made him interesting”. Much like Elizabeth Bennett’s reply to Jane when asked when she first realized that she loved Mr Darcy and replied “when I first saw Pemberley”!

It is thought that the giving of anniversary gifts dates back to the Holy Roman Empire where husbands crowned their wives with a silver wreath on their 25th wedding anniversary. The modern practice, whilst largely commercial, seems to stem from a Medieval German tradition.

The ones we’re mostly familiar with are:

Maurice and Helen are very rare in the UK to have reached their 80th wedding anniversary, symbolized by the mighty Oak. The previous record-holders were Karam and Kartari Chand of Bradford married in 1925 who reached 88 years and 264 days together and Wilfred and Ivy Turberville of Matlock who married on 23rd September 1933 and remained married for 80 years and 343 days.

According to the Office for National Statistics, 42% of marriages end in divorce. Almost half of divorces happen in the first 10 years of marriage, with the most likely time being between the fourth and 8th anniversaries. In 2012 the average age at divorce was 45 for men and 42 for women with 9,703 men and 6,026 women aged over 60 getting divorced. It is very unlikely that Maurice and Helen will add to these statistics!

Bearing in mind the statistics, I suppose it’s not really surprising that the national tree of England, that symbol of strength and endurance, is used to celebrate the extraordinary attainment of reaching the 80th wedding anniversary. Oak seems like the perfect material to celebrate an 80 year marriage.

The enduring qualities of oak wood together with its attractive graining makes it a popular material for a variety of functional and decorative purposes such as furniture and flooring. The reason we use oak for many of our door designs is because of its longevity and beauty.

As a company JB Kind is way past its oak anniversary but one thing is sure, oak will play a big part in our future.